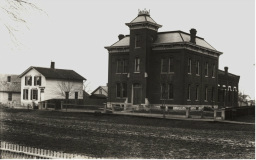 Crown Point was established in 1840 as the county seat  of  Lake County. A frame courthouse was built in 1849 on Clark Street, north of the 1878 courthouse. The building contained a courtroom, jury room, and sheriff’s  room. In 1851, a small, wooden jail with heavy hardwood cross planking and cells defined by sheets of iron was added. The town and county developed rapidly in the next thirty years and a new brick and stone courthouse was erected in 1878 at the intersection of Main and Joliet Streets.

The first permanent sheriff’s residence and adjoining jail was built in 1882 at its present location, 226 South Main Street, at a cost of $24,000. The jail measured 36’ by 48’ and contained six steel cells for males, four for females, and strong steel corridors. 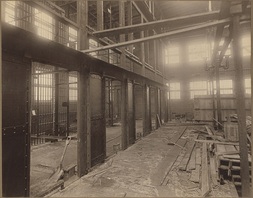 As the county’s population grew, a larger jail was needed. Around 1908, this jail was replaced with a 50’ by 120’ structure, and in 1928 another addition was made that extended the length of the jail through the  block to East Street. The combined residence and jail included all the facilities necessary for its purpose as a law enforcement institution. Located within the walls were the family’s living area, warden’s residence, department offices, 150 cells, maximum security accommodations, institutional kitchen, food storage, heating and cooling systems, barber shop and a garage. 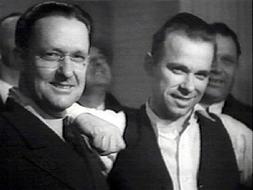 The Crown Point jail was considered to be one of the finest in Indiana and thought to be escape-proof. However, on March 3, 1934, a young gangster named John Dillinger proved it to be otherwise when he made his daring escape.

Dillinger was arrested in Tucson, Arizona in January of that year for a bank robbery in East Chicago that resulted in the death of Detective William Patrick O'Malley.  He was extradited to Indiana on January 28th  and placed in the Lake County Jail in Crown Point.

Legend has it that Dillinger carved a gun from a piece of  wooden washboard others say he acquired a real gun (the story varies) and forced  a trustee and others to lock up 14 jailers including the Warden and a fingerprint expert. With a fellow prisoner and two hostages, he made his escape over the state line into Illinois in the sheriff’s car that was being serviced in a garage north of the jail. The hostages were released unharmed. On July 23rd  of that same year, Dillinger was shot and killed by FBI agents outside the Biograph Theater in Chicago. 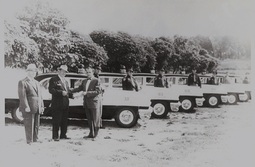 The state law at that time required that the sheriff reside in a house adjoining the
jail. Lake County sheriffs and their families lived in the house for seventy-six
years until 1958 when the residential requirement was revoked. The last sheriff
to live in the house was Jack West. After 1958 the house was used as offices
for the sheriff’s department until 1974. The house has remained empty since that
time. 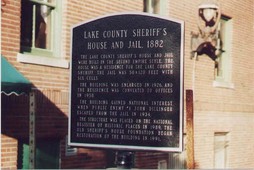 In 1974 the current county government complex was completed on North Main Street in Crown Point, and the sheriff’s offices moved to that facility. During the late 1970’s, some areas of the old residence and jail were used for retail purposes as part of a commercial complex. After they closed, the buildings remained unoccupied. In 1987 interest in restoring the facility grew and the Old Sheriff’s House Foundation, Inc.         was formed the next year. The Old Sheriff's House and Jail was placed on the National Register of Historic Places in 1989 and the property was acquired in 1990 and restoration plans began.